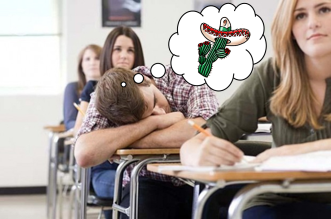 Harris made the statement at approximately 11:00 am Tuesday morning, after a night of particularly vivid dreams, which came after he fell asleep completing the online work for this Spanish 203 course.

“I didn’t understand everything people were saying,” Harris said of his dreams, “but we were definitely trying to buy drugs in Costa Rica or something. It must have been Spanish, because I don’t know any other language.”

Harris, who maintains a solid B+ in his Spanish class despite his shaky grasp of the preterite, is optimistic about his progress.

“They say that you’re not really fluent in a language until you start dreaming in it,” Harris explained. “And I think I’m pretty much there. At this point, I feel like there are some thoughts I can’t even express in English.”

Harris’ suitemates were not surprised to learn about his newfound ability. Andrew Thompson, who regularly consults Harris for his own Spanish 101 homework, described him as a “Spanish genius.”

“Matt knows all about the weather, and like, the genders and shit,” he said. “I’ll say something like, ‘la día está calor’ and Matt will be like, ‘No, no, no. It’s el día hace calor,'” he said. “Spanish is super confusing, but Matt really gets it. He could totally dream in Spanish.”

Harris said he was worried his Spanish might have deteriorated after the summer, which he spent working in his dad’s law office in Charlotte, only practicing when he “talked to gardeners and stuff.

“The first day was a little rough,” Harris said of his 203 class this semester. “I couldn’t figure out how to say what I did this summer, but now that I’m dreaming in Spanish that kind of thing won’t happen again.

When asked if he remembered any of the dialogue from the dream, Harris, who is working toward the Spanish for the professions minor, claimed that he “couldn’t really remember specific words,” but that his dream was “definitely Spanish.”

Harris, who uses Google Translate to complete most assignments, has updated his resume to “proficient” in Spanish.