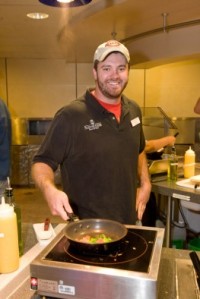 CHAPEL HILL, NC – Dining hall employee Vance Curton is known for having a good time on the job. Famous among student dining hall patrons for his verve and charisma, Curton comes into work every morning with a can-do attitude and bath salts coursing through his veins.

“Vance wakes me up with his energy and charm every morning,” said Tyler Rodriguez, junior chemistry major, as he waited at Curton’s omelet station in Ram’s Head. “He cooks a killer breakfast.”

“No better start to the day than an omelet, right Eddie?” Curton yelled to Rodriguez, attempting to flip egg goop with his bare hands and laughing maniacally.

Burning his right hand on the griddle, Curton broke into song in an unknown tongue.

By 11:30 am, Curton was at the salad bar station for his usual lunch preparation routine. He fluffed up the lettuce, grabbed a mouthful of banana peppers, and then proceeded to pour the different dressings over the counter, mixing them up with his flaccid penis.

“Vance always saves some of his special sauce for me,” said sophomore Will Stilles. “Ever since I met him last year, I’ve looked forward to seeing his silly smile every time I grab lunch.”

As he watched Curton cheerfully packing up the salad bar at the end of the lunch rush, Ram’s Head manager Kevin Nillard couldn’t help but admire the bath salt-dependent 28 year-old’s enthusiasm for his job.

“He’s a goofball all right, but Vance really is the ideal employee,” Nillard said. “Whether he’s voluntarily scrubbing the friers with his head or joking around with the students, demanding that they give him $20, it’s obvious that he has something in him that pushes him the extra mile.”

Nillard was interrupted when Curton motioned him over to the salad bar and emitted a high pitched scream in his face for 10 seconds.

Around 5:00 pm, even the effervescent Curton was starting to slow down, but after a heaping helping of Cocoa Puffs and a quick trip to the bathroom to snort the contents of a Vanilla Sky bath salts packet, he had regained his pep. Curton spent the next four hours going from table to table, telling lewd jokes and vehemently exorcising demons from scores of adoring UNC students.

“He’s just always so happy and full of life with those dreamy bloodshot eyes,” said one delighted dining hall patron. “I just don’t know how he has the energy!”

By the end of his dinner shift at 8:00 pm, Curton’s bath salt-induced vigor was running low, but the irrepressible rascal was already looking to the future.

“I’m already dreading tomorrow,” he said sitting with his head in his hands, “but I need the money to buy the bath salts, because I can’t get through this job without them. It’s a real catch-22.”

REPORT: If You Were Not Here, Your Roommate’s Skype Conversation With His Girlfriend Would Be Different

CHAPEL HILL, NC — Expanding on previous research on Skype calls between college-aged couples that take place between 10:00 pm and 1:30 am, a new study published by Henry Frotizien, a UNC-CH professor of sociology, shows that your roommate’s Skype conversation would “almost certainly be different” if you were not in the room.

Professor Frotizien’s longitudinal study concluded that, “with 95% confidence, your roommate’s conversation would not reflect, in the slightest, the odd, whispered chattering you hear while you are at your desk trying to finish up homework.”

In an interview, Professor Frotizien discussed the impetus for his research.

“We had long observed that, when you were present for the call, your roommate was lying in bed, talking with his girlfriend in a high-pitched whisper voice about mundane daily activities,” Frotizien said. “Not only was he speaking in a tone of voice that he does not use with his girlfriend in any other context, but conspicuously, he was not discussing anything of depth with the person he is closest to in this world beside his mother.”

“Our study has shown, scientifically, that this is not the way he would otherwise be talking,” he said.

It is still unpredictable, according to Frotizien, what your roommate would be talking about, and in what manner, if you were not around, but that in virtually every case, it would be completely different.

“They could be talking about disgusting, filthy sexual things, or maybe fighting, or maybe even being silly and cutesy–we just know that it would not be the weird banter they they have when you are in the room, possibly listening to the conversation,” Frotizien said.

The report also found that, in addition to being different, Skype conversations would typically last much longer if you were not present to start going through the motions of getting ready for bed, hoping that your roommate would just take a hint.

Your roommate, however, called the report, “misleading.”

“Sure, the conversation might be different, but dude I totally don’t mind you being in the room. My bad if I am inconveniencing you, like, I don’t want you to feel awkward, this is your home too, but I also have to talk to her, ya know?” he said. “I mean, like, it’s no problem.”

Frotizien said he hopes to further investigate whether your roommate and his girlfriend are typically talking shit about you or having a fight when they type during their Skype sessions.

The Tar Heels head to Raleigh tonight to take on the N.C. State men’s basketball team. What’s your take? 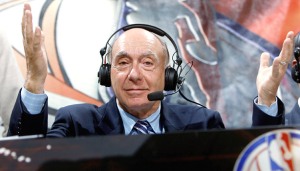 “I’ve got a lot of work to do, way too much work to watch the game, so I’ll be in the library, watching the game and then doing my work.”

“Pshh, N.C. State? They’re not even our rivals. I have more important things to worry about. Like how my dad just got laid off. I don’t know if I’ll be able to go here next year. I’m scared, yeah, of course I’m scared, wouldn’t you be? But why am I being so selfish? He’s the one who just got laid off, just like that. How do you invalidate a human’s existence like that? How can you just tell someone he has nothing all of a sudden? I don’t even know if he and my mom have told my sister. God, my sister. I’m sorry, it’s been a really hard week.”

CHAPEL HILL, NC — Sitting silently and as still as possible, Hannah Nietzon, a junior business major, began not having any new experiences after completing her one page resume earlier this morning.

After adding her recent volunteer work at a Chapel Hill elementary school to the ‘Experiences’ section of her resume, filling it to the point that she was able remove the last of her high school achievements, Nietzon spent the rest of the day alternating her gaze between an electrical outlet, the wood of her desk and the wall.

To stop from experiencing boredom, Nietzon occasionally drew straight lines down a piece of paper.

“I think the experiences she has on her resume reflect exactly who potential employers want her to be,” said friend Claire Traut after Nietzon refused to be interviewed, fearful that it might constitute a new experience. “She has everything she needs–from volunteering to an internship with a consulting firm–so at this point, she can’t risk experiencing anything less marketable.”

Until her resume needs to be updated, Nietzon is expected to divide her time between attending class, running on the club cross-country team, volunteering with kids, standing motionless, and working with Students for Education Reform (SFER), the organization with which she helped launch a book drive last spring.

“Every child in Orange County be able to follow their passion for learning beyond the classroom,” she the woman trying to make herself dormant. “We know that a passion for education drives learning–not just doing what you are told to complete, but caring about learning something new everyday.”

CHAPEL HILL, NC  – Phillip Ouker, a senior economics major, will graduate this spring not knowing that, outside of his presence, many of his peers have referred to him almost exclusively as “Black Phillip” for the last several years.

Ouker was born and raised in Pinehurst, North Carolina, where he thrived academically and socially. He became ‘Black Phillip’ when Philip Steely, who is white and now attends NC State, moved from Connecticut to Pinehurst, joining Ouker’s high school class. Unbeknownst to Ouker, his peers quickly adopted “Black Phillip” as a helpful moniker to distinguish him from Steely.

“I was friends with both of the Phillips, the one from Connecticut and Black Phillip,” said classmate John Brantwin. “Black Philip was the man.”

When Ouker arrived in Chapel Hill as a freshman at UNC, he soon embraced the new environment, joining the UNC General Alumni Association, getting involved in the Campus Y, and earning a spot on the club soccer team. His soccer teammates, like his friends in high school, developed a system of identification to easily distinguish between Ouker and a mutual friend, Philip Winters. Winters, who also played on the club soccer team, was called “Phillip.”

“It wasn’t meant to be offensive,” said Jonathan Williams, Ouker’s teammate. “We only called him ‘Black Phillip’ because we knew someone else named Phillip. And that Phillip was not black.”

As a senior, Ouker has devoted his energy to working on a senior thesis in economics, which explores the relationship between international banking systems and developing nations. To supplement his thesis, Ouker has completed several internships, including a two-month term with Goldman Sachs last summer.

“He was a delightful employee,” said Abigail Smith, who supervised Ouker during his time with Goldman Sachs. “When I would tell associates that Phillip was working on their project, they always wanted to make sure that it was Black Phillip.”

After graduation, Ouker plans to pursue a Ph.D in economics at Harvard. In Boston, he will share an apartment with his boyfriend, “Gay Anthony.” 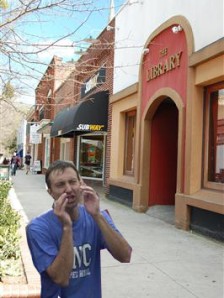 CHAPEL HILL, NC — Standing outside the Library on Franklin Street at 7:00 am, Clifford Teraz, a UNC-CH graduate who currently works for an IT company in Hillsborough, NC, was still yelling “TAR” at all passers-by.

Screaming at students and Chapel Hill residents on their way to breakfast, Teraz, still visibly intoxicated, reportedly approached groups of pedestrians by jumping up and down, waiting for a response, then moving his arm back and forth to indicate the small crowd should respond.

Susie Timmons, a runner who encountered Teraz, said that the man’s appetite for revelry seemed insatiable.

“At first, sure, I played along and I said ‘HEELS.’ I’m excited too,” she said. “But he tried to follow me and keep it going, and there’s always a point where you kind of start clapping because you can’t just yell ‘HEELS’ forever.”

At press time Teraz was seen trying to climb over the counter of Sutton’s to sing “Hark The Sound” with the employees.

“I accidentally burned a man alive.” 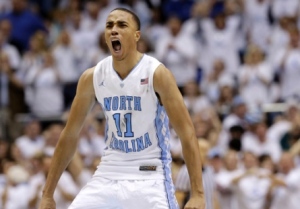 “Doctors say I will be unable to move my arms from this position for two to three weeks.” 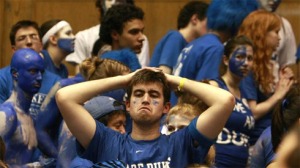 “It’s hard because I always get what I want.”