“It’s Okay That I Don’t Go to an Ivy Because Our Basketball Is So Great,” Duke Student Told Himself 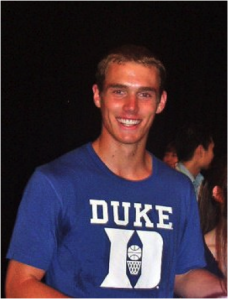 Durham, NC — Saying that he was almost glad that he didn’t get in off the wait list at Dartmouth or Cornell, Braden McEwing, Duke University junior, told reporters yesterday that the fun provided by his school’s basketball team made him feel okay that he did not go to an Ivy League school.

“Maybe the connections aren’t quite what they would be at Princeton or somewhere, but you can’t beat the excitement of March Madness at Duke,” he said. “Having a basketball program that you can count on to go deep in the NCAA tournament every year makes it all even out.”

Having structured his entire high school experience around his parents’ expectation that he would follow in the footsteps of his older sister, Meghan, who graduated from Harvard last spring, McEwing said that he was initially disappointed when he realized that he would end up at Duke, but soon came around to the idea that the school’s balance of athletics with academics would be “more enjoyable, anyway.”

He reiterated that sentiment last night, on the eve of Duke’s first-round matchup against fourteen-seeded Mercer University, right after his sister texted him excited that Harvard had won its own first-round game.

“Sure, there was that freak loss to Lehigh a couple of years ago, but Duke basketball is a consistent contender,” thought the man who is working a consulting internship at Deloitte and not McKinsey this summer. “This year, who knows–we have a team that could make the Final Four or maybe even go all the way.”

The same evening, Duke basketball coach Mike Krzyzewski told reporters that he felt okay for never pursing a coaching career in the NBA because, “When you have a post-season tradition like we do, it’s hard not to feel like you’re in the place where you belong.”

5 thoughts on ““It’s Okay That I Don’t Go to an Ivy Because Our Basketball Is So Great,” Duke Student Told Himself”