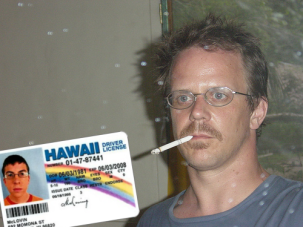 “I used to be someone, man,” said former ID dealer Chet Wilkins, who has since taken to playing dice games in Rosemary Street alleyways. “Well, not myself…some man named Greg Baxter. Greg was chill.”

The lower cost, higher quality, and the convenience of avoiding people like Greg has drawn many customers away from going to the Mom and Pop fake ID dealers’ homes.

“There used to be all these little extra costs,” said Trent Wiston, who purchased a fake ID a few years before the overseas boom. “You’d have to bring some food to–well the guy I bought it from was named Greg–and you’d have to bring him food and; shit, yeah, same guy. Okay, well, yeah you’d have to play Fifa with him too. It was just not fun.”

“He just licks his lips way too frequently for me to be comfortable hanging out with him,” he added.

But, that loss in business has left some in difficult times.

Wilkins, who dropped his Greg Baxter persona once he lost the fake ID, keeps a small apartment in Carrboro, where evidence of his former business is plentiful. Scattered across his kitchen table are dozens of stock ID photos, some with curly mustaches and eyepatches doodled on.

“Yeah, there’s not much to do around here,” asserts Wilkins.

There is an unmistakable emptiness in the apartment, most notably in the rectangular patch of unstained carpet in the corner marking where the TV used to be. Walls that were formerly covered with stolen street signs are now left bare, occasional holes marking times when his anger at the situation became physical and uncontrollable.

“How can I compete with the internet? I don’t have a hologram machine in here. I can’t afford free shipping,” said Wilkins, gesturing to the small craft station, purchased at A.C. Moore, where he did most of his ID work. “I’m just a blue collar man trying to make it in America. Where’s my union?”

“And how the hell am I supposed to feed these sketchy, sketchy mouths?” he added, pointing towards the pair of potheads sprawled on his couch, who were looking at the spot where the TV once stood.

“What was once a thriving business and viable option for the sketchy people of Carrboro and Chapel Hill has now vanished, gone the way of the milkman, Blockbuster and a good factory job. In its wake is left pain, frustration, and many unanswered questions,” said Tad Wallace, a professor of history at University of North Carolina at Chapel Hill focusing on the changing economy of North Carolina.

Still, amid this wreckage of a careening American Dream, some say there is still hope.