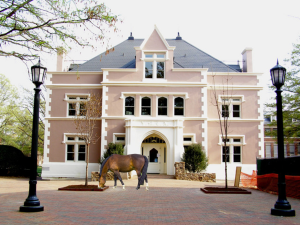 “It’s an opportunity to do what we do best,” said Campus Y Co-President Shelia Turzen. “Get way up on an incredibly high horse.”

The event, Turzen said, is vital to the Campus Y’s mission.

“For years, the Campus Y has been working to truly change our communities through social innovation and justice, taking on the problems that our society all too often ignores,” she said. “Pluralism needs to be–

“Woooah Bessy!” she cried, gripping the reigns of her own high horse, which had reared up beneath her. “Calm down now, girl–or whatever your gender identity may be. You’re safe here.”

For the event, UNC’s Equestrian Team’s most experienced riders will help students mount horses that stand up to nearly 25 hands in height. Once participants are in the saddle, Campus Y officers will guide them in rhetoric befitting their new position.

“We have two goals for the lessons,” said Sierra Blanche, one of UNCE’s veteran competitors. “The first will be to get our riders up onto the high horses, then it will be the Campus Y Cabinet’s job to teach the riders how to treat their peers who are still on the ground.”

According to Campus Y Co-President Mark Ruddy, beginning riders will start off with the smaller Shetland Pony and will be instructed to make a series of only mildly pretentious statements to other non-Campus Y students, just to get a feel for being in the saddle.

“On the ponies, we’ll get them started with some outbursts about gentrification and white privilege,” said Ruddy, “and then move on to the complicit role we all play in global racism even by choosing to attend this university.”

As riders progress to larger steeds, Campus-Y Cabinet members will teach them how to look at non-Campus Y students from lofty equine heights.

“It’s sort of a blank, confused stare,” said cabinet-member Teegan Colmbs. “You want them to know that you’re disappointed by their apathy, and that they should be disappointed, too.”

This is the first year that the Campus Y will make lessons available to students not on the Campus Y’s Exec Board, which frequently uses the equestrian team’s high horses on its retreats.

“As a board, we could not be more excited about opening up high horse lessons to the student body,” said Ruddy. “It will be so refreshing to see even just a few other socially conscious, liberally oriented activists riding around on tall, beautiful American Dream Drafts and fighting for worldwide economic justice through locally nucleated, pan-cultural partnerships.”

To build anticipation for the event, the Campus Y’s Development Committee will be riding a number of its highest horses onto campus this Friday at 3 p.m.

“Our plan is to drum up some publicity for the lessons while protesting the environmental threat posed by the number of carbon-emitting news vans in Ferguson over the past few weeks,” said committee-member Suraj Patel. “It’s a problem that’s really been neglected by the masses.”

“We’re going to see if we can get the horses to spit on women in sororities,” said committee-member Derek Winston.

If the event is a success, UNC’s student-run radio station WXYC plans to teach students how to listen to music from on top of high horses, too.