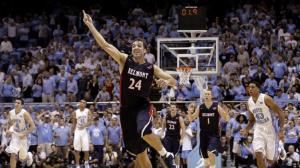 Tar Heel players filed into the locker room silently after a late Belmont three-pointer sealed the game. Some suppressed sniffles and avoided eye contact, while others sat with towels over their faces.

Glowering at the floor, Brice Johnson began to breathe heavily through his nose before standing up and slamming his fist against the wall of his locker.

“Fuck this shit,” yelled Johnson to a still silent room. “I didn’t think an unranked bunch of fucks could upset me like this. Goddamn fucking bullshit.”

“Maybe if J.P. could make a free throw,” Marcus Paige mumbled from the corner of the room.

As P.J. Hairston looked down and turned his back to the room, Paige stood up, screamed, and leapt onto his back, pounding Hariston with both fists as teammates tried to restrain him.

The fighting continued until Roy Williams burst into the room.

“The hell y’all doing out there,” began the red-faced coach, his silver hair matted with sweat, “Marcus sit the fuck down. All of you sit down and shut up, you over-ranked, pretentious bunch of cocksuckers.”

“Are you listening to me, James?” Williams said, bringing his face inches from James Michael McAdoo’s, his eyes bulging and spittle flying from his mouth, “I got news for you McAdoo, you’re not as good as you fucking think you are.”

“And I’ve got news for all you boys,” he said, wheeling away from McAdoo to face the room, “all of you played like absolute shit tonight. Except for you Leslie, you played about average. Fuck you.”

“Boys, I’ve been coachin’ basketball a long time,” continued Williams, the veins on his forehead bulging, “and I can’t tell you the last time I was this upset. Belmont? Fucking Belmont?! Does anyone even know where Belmont is? Did anyone even remember that we were playing Belmont this year?! Fuck all of you,” he screamed, grabbing a folding chair and hurling it across the locker room.

Joel James began a convulsing, hiccup-laden sob as snot flared from his nostrils.

“I’m…so…upset,” he whimpered between desperate inhales.

After Williams slammed the door behind him, freshmen Kennedy Meeks, who had been silent the whole time, stood up and ripped a picture of Michael Jordan from his locker, a single tear rolling down his cheek.

Sources close to the team said they expect the Tar Heels will face even bigger upsets as their ranking falls throughout the season.