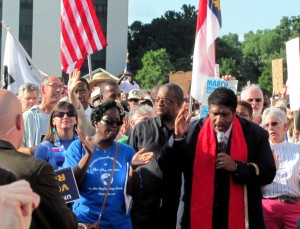 Raleigh, NC — Not satisfied with the attention of hundreds of bleary-eyed freshman in his 8:00 am Political Science 101 class, Professor Andrew Simmons has joined a growing number of UNC faculty by “making [his] voice heard” and “generally taking charge” at the Moral Mondays protests of the North Carolina General Assembly.

Simmons explained that large, politically charged audiences and broad media coverage make Moral Mondays particularly attractive to attention-seeking professors such as himself. “Sometimes these civil rights things get picked up nationally,” he said, “so by bringing attention to myself here in Raleigh, I can make a difference in the number of people who care what I think not just around the state, but across the country.”

Many of Simmons’s colleagues have expressed a similar enthusiasm for foisting their histrionics on the demonstrations.

“I want people to listen to my opinion on every topic,” said Paul Gottfried, a professor of neuroscience at UNC’s school of medicine. “Having a PhD isn’t about being an expert in your field, it’s about proving that you’re smarter than everybody else. I’m tired of people only listening to me when I talk about science. I deserve better.”

As the protests have sustained momentum into the school year, an unprecedented number of faculty have commandeered the movement to feed their insatiable egos. Asked about the phenomenon, professor of sociology Jane Abrams explained that protests offer professors an opportunity to demand attention without “coming across as petulant children.”

“Behaviors that would seem whiney and self-serving in everyday life becomes noble and altruistic at a protest,” explained Abrams. “That’s why I’m going.”