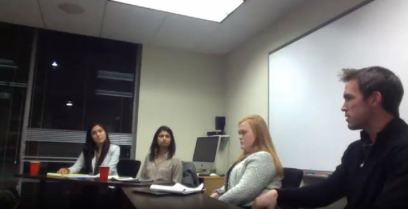 by Bobbi Wood and Carly Burns | The Minor

While snow fell outside, hopes for the future of the University fell inside The Daily Tar Heel, as the last standing SBP candidates sat to answer questions on the eve of the runoff election. Things got up close and uncomfortable in the offices of campus’s second-leading newspaper, as candidates faced new and unconventional debate formats, including a battle rap segment and an Iron-Chef-inspired cook-off with the secret ingredient: yogurt!

We recap the evening’s key moments:

– Houston Summers advocated for fewer “silos” in the organization of UNC’s administration. Fellow SBP candidate Red Army Field General Georgy Zhukov retorted that fewer silos would cause anemic grain production, which he swore that his dictatorship of the proletariat would oppose.

– Responding to the more than 10% of the electorate who dissented by writing in Zora Neale Hurston on the first SBP ballot, Summers defended himself by highlighting the diversity of his campaign. “I think the key is to surround yourself with a diverse team and diverse ideas, which we have done with our diverse member,” he said, pointing to one advisor near the front of the room. “I mean, look at him. Look how diverse he is.”

– Walker responded to the same critique in even stronger terms, avowing that she has been “down with the struggle” for as long as she could recall. She went on to quote Amiri Baraka extensively. “Not a White Shadow/ But Black People/ Will be Victorious…” she concluded.

– Walker built a strong argument for her relative strength against Summers with key statistics, such as her opponent’s 6.01 ERA in the minor leagues. “What kind of weak shit is that?” Walker rhetorically questioned.

– She went on to authoritatively respond to the suggestion that her role as head of the College Republicans evinces a political agenda at odds with the interests of UNC students. “Just because I’m a Republican doesn’t mean I can’t support pro-choice, LGBT-rights, and minority-empowerment causes,” she said. “It means I don’t support any of those things.”

“It means I literally, actively stand against them,” she clarified.

– With red Solo cups in front of them, the forum moderators relieved their boredom with the candidates by taking a drink every time someone employed vague, empty rhetoric about “communication” or “togetherness.” Both were drunk by the end of the evening.

Nikita Shamdasani appeared to drink even more, trying to erase the thought of how easily she would have won the election if she had run against this year’s field.

– After a heated back-and-forth exchange in which the candidates finally revealed key differences in their platforms, with Walker charging “I’ve got to get home,” and “Say, lend me your comb,” and Summers retorting “But baby, you’ll freeze out there,” and “It’s up to your knees out there,” the candidates at last reached common ground, standing up from their chairs, pushing their desk aside, and declaring in unison, “Baby it’s cold…Baby it’s cold outside!”

They clasped hands and held the final note cheek-to-cheek as the crowd rose up and carried them down an empty, beautifully frozen Franklin Street.