Environmental Science Major in Fraternity Has Another Funky New Patagonia 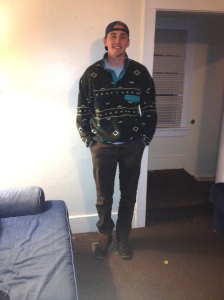 CHAPEL HILL, NC–Saying that they have spotted him wearing the colorful, marshmallow-shaped pullover each of the past several days, sources around campus report that Luke Gibson, junior environmental science major and brother of the Chi Psi fraternity, has another funky new Patagonia.

“What are those, Indian patterns?” marveled one onlooker, silently taking in the teal, brown, purple, and red fleece as Gibson biked across the quad, en route from his apartment near Chi Psi lodge to an 11:00 am meeting of ENEC 225: Water Resource Management and Human Rights. “What an earthy wildman.”

Gibson has reportedly debuted no small number of splashy, loose-fitting Patagonias in the time since he pledged Chi Psi and dropped his physics major in favor of environmental science in the spring semester of his freshman year. All of the garments have featured an outrageous array of brightly hued shapes and swirls on shaggy, polyester wool. Each, somehow, is seemingly more jazzy and kaleidoscopic than the last.

With the latest Patagonia, as with each of them, many have wondered at how various aspects of Gibson’s identity are tied together–so completely and mysteriously–in a single $90 sweater.

“My fraternity is having a cocktail on Saturday, but I can meet to work on the project any time next week,” Gibson was overheard telling an assigned group-mate in an intermediate-level biology class. Gibson reportedly asked a freshman member of the same class to accompany him to the cocktail earlier in the week.

“If there’s any research I can be doing until we meet, just let me know,” added the Patagoina-clad Charlotte native, who reportedly donned an even fancier sort of Patagonia jacket when he went on a guided backpacking trip up Mount Kilimanjaro last summer.

According to climate experts, there will be an estimated three- to five-week window in late March and early April when Gibson will wear Chaco sandals simultaneously with his cushy, complicated fleece–or indeed with an even quirkier one, if he has acquired it by then.

Sources added that Gibson enjoys drinking IPAs as well as smoking marijuana, and also wears duck boots. He has reportedly ruled out neither the Peace Corps nor medical school after he graduates, nor even working for his father’s management consulting company.