Sophomore Returns from Break with Nalgene, Renewed Sense of Acceptance 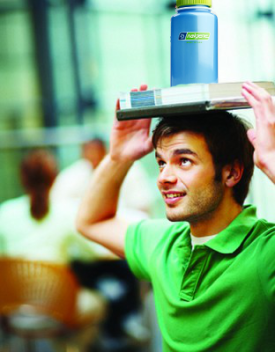 Walling, who has been on the UNC Tramping Club’s listserv since FallFest his freshman year, says he feels more confident than ever after buying his new water bottle.

“I bought the white, sort of opaque Nalgene with the neon orange cap,” said Walling. “It’s the opacity that tells people, ‘The water in here might be dirty, but I don’t mind because I spend a lot of my time in the woods.’”

Though Walling has not hiked or camped outdoors since quitting his Boy Scouts of America troop in 2004, the sophomore says that he plans on making a few changes now that he owns a Nalgene.

“I’ll definitely be buying a pair of hiking boots,” he said. “And as soon as I figure out where people buy jeans that look good when you cuff them, I’ll be buying those, too.”

Despite owning a backpack that is already equipped to transport water bottles in a convenient pouch, Walling also plans to purchase a neon green carabiner with which to clip his Nalgene. This method, Walling says, makes sense to people who understand hiking.

“I had a lot of success bringing my Nalgene to class on FDOC,” said the sophomore, who made sure to loudly plant the bottle on each of his desks throughout the day. “I only spilled water on myself while I was drinking twice, and it hopefully won’t happen again.

“It was like a tidal wave,” Walling added, shuttering. “It won’t happen again.”

According to his former English 105i professor, Dr. Hilary Rosin, Walling wrote his freshman research paper on the social impact of owning a Nalgene at Carolina.

“If I remember correctly, Garret collected the data for his paper from a survey that he distributed in class,” said Rosin. “He asked how likely students would be to call a male, Nalgene-owning student a ‘Good Guy,’ and asked his peers to rank [1-10] how satisfied they felt when their urine looked clear.”

Having put his research to good use, Walling is sure to refer to his water bottle exclusively as “my Nalgene” for the next two months, and then eventually forget the bottle on a couch in the Student Union.