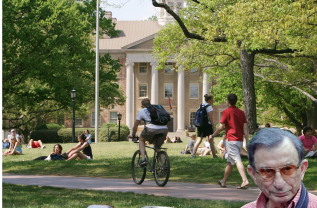 CHAPEL HILL, NC – Contrary to first assumptions, the elderly man currently wandering in Polk Place, taking his time to stop at benches and sit for awhile, is not a professor and, instead, just an old man. The evolving situation has caused widespread confusion and panic.

The man was first sighted around 1 p.m., when freshman Jasmine Redding came across him near Dey Hall.

“He was walking towards the middle of the quad when I saw him. I assumed he was headed to his next class, but then he just stopped and looked up at the sky for awhile,” said Redding. “I wonder what he was thinking.”

The man is wearing a light brown sport coat, maybe tweed, maybe wool. Anonymous sources report that he is likely wearing a wedding ring, though that is still unconfirmed. He has a light head of hair and what appears to be a slight hunch. Height is speculated to be around 5’9″, though some sources report figures as high as 6’2″. No comment on weight has yet come in, though early ballpark estimations are in the 150-200 lb range with a pouch-like stomach.

The situation is still unfolding and reports are hard to confirm.

Some say they saw a man eating an egg salad sandwich on a bench for about twenty minutes, before finishing it off with a sip of water from his thermos, unable to fully chew the plain white bread. He then fuddled with the small bag, which had held the sandwich, crumpling it and putting it in his pocket, only to pick up his book on the history of Abraham Lincoln and slowly read it.

Those who saw the man said they thought the behavior seemed un-professor like, but that “maybe he’s just a lecturer or something, I guess I just wasn’t thinking about it. I just wanted to believe it was a professor.”

No one is sure what has led the man to campus.

“Maybe he’s lost,” said Oren Rufter, sophomore Biology major. “I just don’t know what he was thinking coming here and being old and not a professor. He was walking so slowly.”

Helicopters have circled the UNC campus for several hours after the man’s presence was first reported.

“We’ve got 30 SWAT, six snipers and an ATF squad on standby if he tries to pull anything,” said police chief Bradley Donovan, watching the man with hefty black binoculars. “There’s no reason an elderly man should be here, alone, in the middle of the day. Something doesn’t add up. He isn’t an old guy who teaches people about old stuff–he’s just some guy. What the fuck is happening down there!?”

Despite his sniper team’s urging to let them “take the shot”, Donovan is letting the situation unfold, and monitoring any potential changes.

The man was briefly approached by sophomore Hannah Ludgate, who pointedly asked him what he was doing on campus.

“No, I don’t need any help, thank you young lady,” the man replied, shakily waving her off before continuing to circle the Pit for the fifth time.