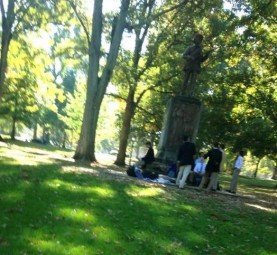 CHAPEL HILL, NC—The Delta Upsilon Fraternity (DU) at the University of North Carolina once again won a mixer with the Daughters of the Confederacy after their Fall pledge class spent last Monday night and Tuesday morning guarding Silent Sam, a memorial to students and alumni who fought in the Confederate Army during the American Civil War.

DU has long been committed to winning this “Lost Cause” mixer.

Every semester they order their pledges to spend twenty-four hours guarding the statue, which, like many of the buildings on McCorkle Place, commemorates soldiers and officers who fought to defend slavery.

“We really enjoy this event,” said fraternity president Chad Baker. “It lets us show our commitment to institutional racism and white privilege while mixing with a great group of girls. We don’t get invited to many mixers and the DoC, despite having an average age of 76, probably party even harder than us.” 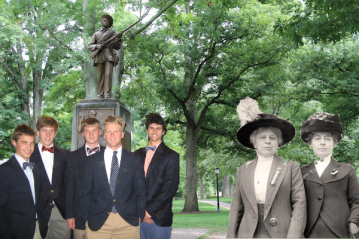 The Daughters of the Confederacy were less enthusiastic about DU’s victory.

“I can’t say I wanted DU to win,” said Waverly Dupree, 83, president of the North Carolina chapter of the DoC, “but none of the respectable fraternities, like DKE and Beta, ever send their pledges.”

Sophonsiba Beauchamp, 78, the chapter secretary, concurred, “DU certainly isn’t the most racist fraternity at UNC, just the most desperate.”

Peter Evans, a brother at DU, had a similar take on the event: “If I got a bid to a better frat, even one like Sigma Chi, I wouldn’t need to prove I’m a racist by sleeping next to a statue dedicated to the saviors of ‘the Anglo-Saxon race in the South,’ I could just casually enjoy the benefits of centuries of accumulated privilege. But with DU it’s not that simple.”

“Plus, no matter how old they might be, I know this way I can get at least some girls to talk to me,” he added.

Other brothers, like Samuel Pierce, were less excited about the event.

“This event was probably more fun when my Dad did it. People back then didn’t seem to mind when fraternities uncritically celebrated the University’s involvement in centuries of violent oppression. Also, the daughters of the Confederacy were thirty years younger. But this is DU, so it’s not like we have better options,” he added.

The Daughters of the Confederacy were also disappointed by the surprising ethnic diversity of DU.

“We like to mix with fraternities that have strong North Carolina roots and traditional, Southern values,” said Emily Bascomb, 91, “that’s why we started the Silent Sam competition.”

“We know we aren’t as white or as Southern as the good frats. Maybe that’s why we’re so committed to this racist pledge task,” he said.