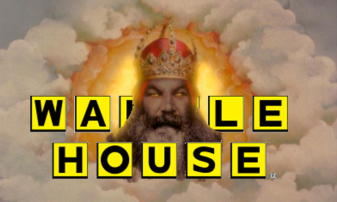 CHAPEL HILL, NC–Last Friday, a heated, lengthy debate took place at the Franklin Street Waffle House, when a group of Carrboro residents argued over the gender of God.

The debate began around 1:30 a.m., when Greg Kleinman and his housemates entered the Waffle House after finishing a case of PBRs and several packs of American Spirit cigarettes. After an order of coffee, hash browns and waffles, Kleinman’s roommate Tyler Wells posed what would become the central question of the evening.

“What if God wasn’t actually a man?” he asked, taking a long sip of his coffee and watching for the reaction of his friends.

“Well that’s obviously a heteronormative assumption steeped in a sickening tradition of patriarchy and male dominance,” said Kleinman, calling the waitress over for more coffee with a shout. “My professor wrote a really interesting piece about it a few weeks ago.”

“Oh shit, think I read that. What is that one with the Nietzsche quote near the end?” asked Willis Brodnich, friend and philosophy minor.

“So I only read, like, the first few pages,” responded Kleinman. “His prose was a little too pedantic for my tastes.”

“It just makes sense, you know?” said Brodnich, as the Eagles’ “Hotel California” played thinly from the restaurant’s worn speakers. “Perceiving God as an asexual being capable of limitless self-reproduction gives such a refreshing way of viewing the world.”

“It just puts you at peace,” he added as Hall hastily scrubbed yet another set of dirty pans, her fingers cracked and hard from hours of soaking in dish soap. She checked the clock, and thought about how her daughter had to be awake for school in only a few hours.

“I mean these are the important questions,” said Kleinman, impatiently scanning the kitchen for the fourth time.

“About time,” said Wells, grinning as the tired waitress placed several plates of waffles down on their table. “You have any thoughts on this?”

“Most days feels like God’s not here at all,” she said, leaning over to refill Kleinman’s coffee.

“It’s just hypothetical,” said Kleinman, rolling his eyes and pulling the mug away from Hall. “Jesus, we were just trying to have a conversation.”