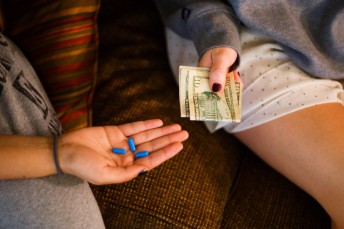 “As someone who wants to be a doctor, I’m no stranger to stress,” said Shaw as she hastily forged her doctor’s signature in the parking lot of the Walgreens where she makes her monthly pickups. “If you want to someday save cancer-ridden children whose lives are wasting away, there’s, I don’t know, stuff you’ve got to do to get there.”

Shaw was midway through studying for an organic chemistry exam when she realized her Adderall bottle was empty, a dilemma which sent her into a panic.

“Last time I refilled, within an hour I had memorized all the amino acids,” she said, impatiently drumming her fingers on the counter as pharmacist Larry Greenwood collected her medication behind the counter. “I just get so much happiness knowing this information will help so many people be healthy one day. I want to be a change-maker.”

“Promoting healthy lifestyles and behaviors is the moral imperative of any health professional,” she said as she furtively downed a fourth pill for good measure, her shaking hands fumbling with the cap. “It’s important to never forget why you’re going through the process to get there.”

Greenwood spoke briefly about the high number of pre-med students who visit his pharmacy.

“It does my heart good to know that these teenagers rampantly abusing prescription medications will one day be the outstanding individuals of the medical world,” he said.

Shaw said she has no intentions of cutting down her Adderall intake any time soon and is hopeful for the prospect of medical school.

“Making it into UNC med school would be an honor,” she said, her eyes bloodshot as she drank her morning coffee in her apartment living room. “Mostly because I already have an Adderall hookup here, but also because I want to have a real impact on the local community that has given me so much.”

“But, yeah, mostly because of the Adderall,” she added.