By Road Zimmerman | The Minor 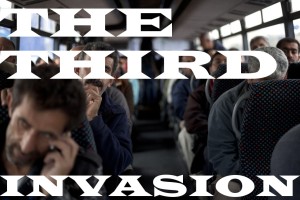 Polyvisual Records’ new release, The Third Invasion, is a compilation tape featuring the quintessential work of Palestinian Noise-Pop-Folk trios currently working in and around the San Francisco Bay Area. A bootleg, the record was compiled from other previous commercial releases, and the result is a new artistic endeavor that points toward the true definition of this scene. As always on The Tune-In, I’ll go through the project song-by-song, providing the context that makes this music listenable.

Famous for their previous work with the noise that occurs during blood transfusions, The Humeadore’s Revenge (known more commonly as HR), embody Palestinian N-P-F Bay Area flavor with their live-animal performance of “MI$$LES.” Recorded using exclusively goats and goat sub-breeds, “MI$$LES” is a dynamic opening track that shows the punch these artists can deliver.

Once Introversion was signed by Duck’s Bill, it seemed obvious they’d follow in the line of greats like Mozaques. But I don’t think anyone was prepared for this track. Known for their utilization of phone jacks ripped out of foreclosed homes, Introversion has a sound that embodies the unspeakable pain so many Palestinians have escaped and a lucky few listeners must now endure.

A powerful sonic display, ESPN Anchor Bill Seward’s Haircut (known in some circles as Seward’s Cut) has long been on the list of bands to watch in this scene. Using old Powerade bottles, exclusively those for the fruit punch flavor, they create a wonderland of sounds by cutting, hitting, throwing, licking, and defiling the bottles. Though their past work was less thoughtful and involved the use of a guitar, Seward’s Cut has evolved to create, in “Gaza,” a political protest song so potent that the Palestinian government considered banning it, “to protect the people from that noise.” You know you are doing something right when a government tries to ban you.

The Dante Quartet, taking its name from a series of Brakhage films, sits atop this scene. They’ve been the critics’ darlings for years, and today they are by far the most popular act working. With songs like “Lorde, I’m Coming” they have brought unprecedented commercial success to Palestinian N-P-F Bay Area scene, selling 14 albums, including 10 to college radio stations. Only time will tell if they can maintain the faint, almost inaudibly high-pitched sound that carried them to the top.

Known for their stance of not “doing shows” or “putting out music,” L**** has taken their artistry to a new level with “PUSSYSHITFUCKBALLS.” For its commercial release, the group recorded over the actual track with an audio file of a 2008 Access Hollywood interview with Nicholas Cage. The interview stands in place of what “PUSSYSHITFUCKBALLS” could be–it could be the song that defines a generation.

Road Zimmerman hosts the “Is This Music? Hour: Wider Sounds” on WXYC from 6:00 pm to 7:00 pm on Thursdays and is an avid reader of Cellar Door.