Drama Professors’ Use of the Word “Delicious” at All-Time High

CHAPEL HILL, NC — Following a scene in his Introduction to Dramatic Performance class in which Alex Mundy, junior psychology major, and Rufus Tally, sophomore English major, improvised off the idea “you’re an obnoxious animal in a small forest,” Andy Daily, Professor of Dramatic Art, described the portrayal as “a delicious morsel [he] could just nibble on for days.”

Daily’s description of the scene was hardly unusual. He is among a large and growing cohort of professors adopting the word “delicious” into the drama vernacular.

A report released this morning by the Institute of Language in Drama shows that 78% of drama professors have used “delicious” to describe a performance in the last week. The percentage of “delicious” use is unprecedented in modern dramatic instruction. 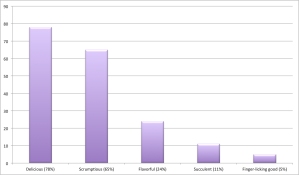 Chart showing words used in the past week by most Professors of the Dramatic Arts.

“We [drama professors] are reacting honestly to performances,” said Daily of the trend, “and, ultimately, when a scene feels most like eating a chocolate baguette beside the Sienne en Francais, it would be wrong to not express that to our young artists.”

Kyle Crawford, Senior Art History and Drama major, said that his performances have been described as “delicious” since his first play in 5th grade. Crawford noted that his most recent “delicious” performance came during rehearsal for a switched gender, switched race, and then switched-back gender performance of Cats.

“‘Delicious’ is a word that gives performers the confidence to truly engage with our art,” he said. “Ultimately, that’s the most delicious thing of all.”