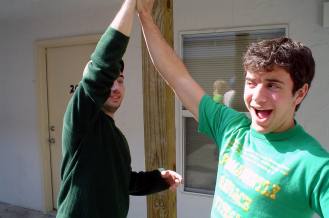 CHAPEL HILL, NC–According to a new report from The Center of Male Relational Studies, a joint project of the Department of Sociology and Anthropology, guy Craig Paulson, junior journalism major, liked other guy Jake Crawley, sophomore history major, after meeting him for the first time at a party last weekend, where they hit it off over a shared interest in marijuana.

Kenneth Frazen, lead author of the study, said the new study opens the field for understandings of male bonding over low-harm drugs.

“We are seeing that, fundamentally, friendships can be formed instantaneously with the use of cannabis,” he said.

According to the report, their meeting was by chance. Paulson saw Crawley in the process of preparing a bong in the bedroom of a house party and decided to interact with him.

Frazen said this was the key turning point in their analysis.

“We suddenly realized we had been conducting our research under a paradigm that both cannabis smokers must have at least one other shared interest,” he said. “We soon discovered that 67% of friends who met while smoking and consider themselves ‘close’ have only one common interest: marijuana.”

In the report, Crawley elucidates upon his friendship with Paulson.

“Craig knows his shit when it comes to bud,” Crawley said of his new friend. “I mean I didn’t know any of the movies he was talking about, and none of his jokes really made me laugh, but damn can he roll a tight spliff.”

“As soon as you get to college you realize that friendships can be so much deeper. Ya know?” he continued.

Peter Dildeaux, who witnessed the burgeoning friendship at the party and was interviewed for the report, said he thought the friendship was something special.

“Hanging out with Craig and Jake felt really natural,” said Dildeaux. “Whenever there was a lull in the conversation, they’d talk about how awesome weed is and they’d be on a roll again. It’s not often you just find that kind of friendship.”

Both Paulson and Crawley fully intend to “chill” next weekend, from which researchers hope to gather more information.

“They said, in a text, that we can come as long as we bring a bag of Flamin’ Hot Munchies,” Frazen said.