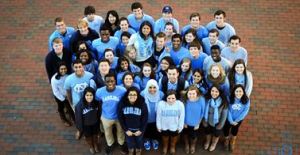 CHAPEL HILL, NC–Saying that they intend to “advocate for change” and “address the most pressing issues faced by the University community,” smiling, well-dressed students from all walks of life squeezed close together all around campus this week to make a difference.

“In the 21st century, Carolina is facing big challenges,” said one young man, whose khakis-clad thighs were pressed tight against those of his diverse peers, his face a vision of progress. “By smiling side-by-side in public, we’re doing everything we can to address them.”

Clusters of convivial, high-minded young adults have appeared everywhere from in front of the Old Well to the steps of the South Building, to the exact center of the Pit. Around the state, policymakers have started to take notice.

“I’ve been working to make UNC less accessible, less safe, and less academically excellent,” said Thom Tillis, Speaker of the NC House of Representatives, “but with so many emboldened, multi-cultural clumps of students cropping up in picturesque spots around Chapel Hill, well… maybe I have another thing coming.”

Many in the UNC-CH community expressed support of the tastefully attired, heterogeneous bands of youths.

“These students get what activism and advocacy are all about,” said UNC political science professor Sonya Tichwell. “As long as they keep congregating outside with their heads held high, it’s hard to imagine that they won’t succeed.”

Though the energetic, well groomed members of each gathering expressed preference for their own spunky bunch over others, all seemed united in their resolve to make Carolina great by standing next to each other in just the right natural light.

“We’re here to create a more engaging, more positive learning environment for all students at UNC,” one Carolina blue-wearing young woman said, her eyes twinkling with the same hope and confidence that shone in those of the 40 like-minded peers surrounding her. “We’re willing to put our arms around each other and smile as long as it takes to make our vision a reality.”

The haggard, grimacing student body president and his anxiety-ridden executive cabinet, clustered together in their offices, were unavailable for comment.